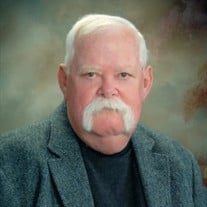 Mr. William Kenneth Abbott, 73, of Lyons, GA passed away on Saturday, January 20, 2018, at his home after an extended illness. He leaves to cherish his memory his wife of fifty-two years, Linda McCurdy Abbott; two children, Christy Abbott Toomer (Kemp), Vidalia, GA and Will Abbott (Penny), Beaufort, SC, three grandchildren, Ansleigh and Tristan Toomer, and Wilson Kinchen Abbott, one sister, Jane Burch (Joel), Phenix City, AL; two sisters-in- law, Diane Phillip (Peter) Mentone, Alabama and Deborah Anderson (James) Lyerly, GA; eight nieces and nephews, numerous cousins and a dedicated caregiver, Jackie Williams. He was preceded in death by his parents, Wilson and Evelyn Jeffries Abbott, Phenix City, Alabama. Mr. Abbott graduated from Central High School in 1961 in Phenix City, AL and received his B.S. degree from Jacksonville State University in Jacksonville, AL where he met his wife Linda. He was a member of the ROTC, a marksman on the University Rifle team and a member/player of the drama society, Mask -n- Wig. After graduation, Mr. Abbott was a history teacher and football coach at Hurtsboro, AL and later a social worker with Alabama Department of Pensions and Securities, and while working with nursing home residents, he found his true calling in health care. He received his Alabama nursing home license in 1971, was a participating founder of the Alabama Nursing Home Association and the first reciprocal Georgia Licensed Nursing Home Administrator. He employed thousands of residents of Georgia, Alabama and South Carolina in his nursing homes, Home Health Care Agency, hospice and private home care who cared for thousands of sick and elderly clients during the last 30 plus years. He considered himself the “patient advocate” Mr. Abbott was a true entrepreneur and successful businessman who encouraged and mentored many to follow their path to reach their maximum potential. He felt he had been blessed and wanted to help others succeed. He was a true patriot and an ardent supporter of the American Dream. Kenneth saw the best in everyone, never critical and never judged a man by his wealth. Mr. Abbott was an Elder at the Lyons Presbyterian Church and a member of English Eddy Presbyterian Church. Mr. Abbott was a member of Millikens Creek Masonic Lodge #302, serving as Master in 2002, Inman Creek Masonic Lodge #491, serving as Master in 2005, Lyons Masonic Lodge #49, and a Masonic lodge in New Mexico. He was also a member of Alee Shriners in Savannah, GA. He was a founding member of the General Robert A. Toombs Camp #932, Sons of Confederate Veterans, a lifetime member of the NRA, the life member Altamaha Shooting Club and life time member of the Jacksonville State Alumni Association. In 1995, he completed the Atlantic to Pacific Trans Continental Trail ride that started on Tybee Island, GA and ended in Imperial Beach, CA, going through 89 cities and towns totaling nearly 3000 miles. Kenneth stated this ride was life changing and he would never forget it. Mr. Abbott raced motorcycles, was a licensed NASCAR driver and drove his race car in the 1990’s on dirt tracks in Panama City, FL and Savannah, Ga. He collected numerous antique vehicles and participated in car shows. He especially loved his ’57 Chevrolet and ’65 Corvette. He drove his Corvette with car guys on NASCAR tracks at Atlanta Motor Speedway, Charlotte Motor Speedway, and Rockingham Speedway. He was a member of Franklinia Playhouse in Vidalia and had actor plus using his antique cars in the movies, Forrest Gump and Something To Talk About. He wanted to do everything in life, including obtaining a Captain’s license to assure safety while boating on the Atlantic. He was a history buff reading daily and enjoyed traveling, spending his summers at his cabin in Timberon, New Mexico, where he enjoyed their cool summer weather for riding his horse in 50 mile endurance races, camping on Indian grounds, visiting western museums, even meeting various western authors like Terry Johnston. His aim in life was to be a good man, a good husband and a good father, with a great relationship with both his daughter Christy and son Will. He said many times that the best decision he ever made was marrying Linda and having a family. His three grandchildren were the delight of his later life and he was looking forward to the birth of his 4th grandchild in March and the family knows he will be watching. He always had a story in his extreme southern accent, large white mustache and if not on a horse, wearing a seersucker suit and hat. He was the typical southern gentleman, in more ways than one. He told his family many times, “listen and you will learn”. Kenneth and Linda moved to Toombs County from Donalsonville, GA in 1989 and came to love the area, but also enjoyed their mountain home at Mentone, AL. The funeral service will be held Wednesday, January 24th at 2:00 p.m. in the chapel of Ronald V. Hall Funeral Home with Tommy Seay, Royce Yawn, Michael Gardisser, and George King officiating. An additional funeral service will be held on Friday, January 26th at 11:00 a.m. Central Time in the High Point Church of God, 3385 County Road 114, Henagar, AL. Burial will follow in the Pine Grove Cemetery in Henagar, a family cemetery with five generations. The family will receive friends at the funeral home in Vidalia on Tuesday evening from 6:00 until 8:00, and again on Friday morning in Henagar at the High Point Church of God from 10:00 Central Time until just prior to the service.

The family of William Kenneth Abbott created this Life Tributes page to make it easy to share your memories.

Send flowers to the Abbott family.