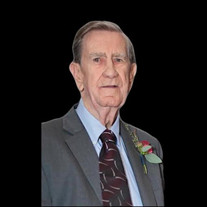 William H Freeman, age 91 of Flat Rock, Alabama, passed away peacefully on Monday, February 14, 2022, surrounded by his loving family. William was born in Chattanooga, Tennessee on March 21, 1930 to Willie & Pluma Freeman. In 1954, he married the love of his life, Jewel Brown Freeman on November 13, and the two were blessed with 63 years of marriage and a large, faithful family. Left to carry on his legacy include his five children: Bobby and Shirley Freeman, Glinda Freeman, Benny and Nina Freeman, Chris and Tabatha Treece, and Keith Freeman Nine Grandchildren— Sherry & Timmy Turner, Casey & Tracy Cartwright, Jason & Kim Cartwright, Tyson Murray, Adam & Amanda Freeman, Levi & Keri Freeman, Tonya & Jarad Brown, Michael & Halie Freeman, Karah & Alex Vaughn 22 Great grandchildren— Amber Turner, Dustin Turner, Shelby & Hannah Turner Cecily & Will Goza, Kendra Cartwright, Kaylee Cartwright, Caison Cartwright, Beth & Jake Trotman, Amy Hereford, Madison Murray, Matthew Murray, Ava Freeman, Mia Freeman, Stormy Freeman, Lane Freeman, Emma Freeman, Whitney Brown, Arabella Freeman, Audreana Freeman, Jasper Freeman, Ellie Freeman, Maverick Vaughn 13 Great Great Grandchildren— Jasmin, Jayda, & Summer Shupe Slayde & Darren Turner Hayden Knowles, Camdyn, and Ledger Goza Ryker & Rook Abernathy Lily & Trent Trotman Tenley Hereford His siblings— Clarence Freeman Linda & John Laney Gerald Freeman Brother in laws and sister in laws, many nieces & nephews, a host of family and friends, and members of Ider Holiness Church. Brother William was a faithful and devoted leader and elder of Ider Holiness Church. He has been serving the Lord for 57 years and has remained loyal and steadfast in his faith. He loved the Lord, his family and his church family. He believed in attending church regularly, supporting the church, and instilled this in his children. He was a spiritual leader, encourager, and a true example. As a husband, Dad, and Papaw - he was second to none. As a Child of God - one of the best we know. Ider Holiness Church has lost a dear brother and one who’s place will not be filled. We are comforted knowing he has finished his earthly race and is rejoicing with the Lord and with Mamaw Jewel, where he has longed to be, and especially that he was reunited with his sweetheart on Valentine’s Day. In addition to serving the Lord and taking care of his family, he enjoyed his tool grinding shop. William retired after 50+ years in the business and then opened his own shop, Freeman’s Tool Grinding, where he continued to work until he was 91 years young. Many friendships were made through his business and some would say tools from Freeman’s were better than brand new tools which always made him smile! William was preceded in death by his wife, Jewel Brown Freeman, parents, Willie and Plumer Freeman; brothers, Robert & Emma Freeman, Donald Freeman, Tommy & Cora Lee Freeman, Walter Freeman; sister: Gertrude & Afies Brown; sister-in-law: Frances Freeman. The family will be receiving friends Thursday 5-8 PM, Friday 4-8 PM, and Saturday 10-1 until the funeral at 1 PM All times CST at Rainsville Funeral Home Chapel with Bro Brent Michaels officiating and Rev Shirley Byrum with us by heart. Burial will follow at Oaklawn Memorial Garden. Choir: Nieces, nephews, and members of Ider Holiness Church The family wishes to express their sincere gratitude to all those who have supported them during this time of loss. Your love and prayers have meant so much! Sincere thank you also to Hospice of North Alabama for your care and love

The family of William H. Freeman created this Life Tributes page to make it easy to share your memories.

Send flowers to the Freeman family.