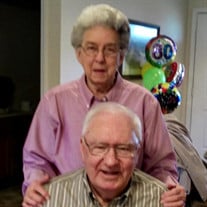 Thank You Aunt Bobbye For Loving Us By Sherri Blevins Mrs. Wanda Jean "Bobbye" Williams,(I and many others lovingly called her Aunt Bobbye) passed away Tuesday, June 2, 2020, at her home. For sixty-eight years, longer than I have been alive, believe it or not, Aunt Bobbye and my Uncle Hugh Don Williams were husband and wife. That ended two years ago in May when Uncle Hugh Don left this world and joined the other Williams Boys in Heaven. Bobbye and Hugh Don produced two outstanding children, local pharmacist Rodney Williams and Burn Coordinator of the Operating Room, Kelly Bryson, who both shared their mother's love of healing. Aunt Bobbye has always been a stable figure in my life as well as every other member of the Williams and Stout family. Whenever any of us needed advice on what to do for a sick child or any other medical question, for some reason, Aunt Bobbye was the one we would ask. The reason was she knew what she was talking about and was always willing to help whenever asked. I will never forget the first night I brought my newborn baby girl home, (who is now a mother) Aunt Bobbye came to my rescue. As a new parent who knew little to none about caring for newborns, I panicked when my baby girl seemed to have difficulty breathing. It was about midnight and I immediately dialed Aunt Bobbye on the phone, still in a panic over what to do. In a calm voice, she asked, "Do you have one of the green suction devices the hospital gives new parents?". I did remember seeing something that looked like what she described in the items brought from the hospital. I followed her advice, and the crisis was solved. Even though that may seem trivial to many, she eased the panic of this new mother,and in my eyes, she saved my daughter's life. That is only one of many times when I sought her medical advice. Aunt Bobbye was not only a loving aunt; she was more like a mother to all who had the privilege to know her. Any time you visited her home, the first thing she insisted on was feeding you. There have only been a few times while visiting Bobbye and Hugh Don that either myself or my husband left without tasting something delicious. She was an excellent cook who could have opened a restaurant, in my opinion. When she was physically able, Bobbye cooked a full course meal with meat, vegetables, and many times desserts each day for whoever happened to drop in. Many have heard the saying, "Behind every great man, there is a great woman;" Aunt Bobbye was beside Hugh Don instead of behind him. She was a faithful partner to him working many long days in the family-run grocery store while still cooking those tasty meals and parenting two growing children. She also pampered Uncle Hugh Don spoiling him just a little. During her 87 years, Wanda Jean "Bobbye" Williams filled many different roles, daughter, mother and wife, aunt, mother-in-law to Jeanette and Wally, and an extraordinary role as a grandmother. She enjoyed the love of her two grandsons, Will and Tucker Bryson. When Will married, she gained a granddaughter in his sweet wife, Ashley. One other way to identify a person of great importance is by looking at those who are loyal to them. Three extraordinary people played a very significant role in Aunt Bobbye's later life. After suffering from several health problems, Bobbye required constant care. Fran Shankles, Randy Smith, and Kathy Townson lovingly cared for Aunt Bobbye like she was their mother. They became family because she also treated them like her own. Aunt Bobbye, you will truly be missed by all who knew you. We love you! Funeral services will be held on Thursday, June 4, 2020 at 1PM at Rainsville Funeral Home Chapel with Elder Ricky Harcrow officiating. Burial will follow in Mountain View Memory Gardens. The family will receive friends Wednesday, June 3rd from 5PM-8PM & Thursday, June 4th from 10AM-1PM.

Thank You Aunt Bobbye For Loving Us By Sherri Blevins Mrs. Wanda Jean "Bobbye" Williams,(I and many others lovingly called her Aunt Bobbye) passed away Tuesday, June 2, 2020, at her home. For sixty-eight years, longer than I have been alive,... View Obituary & Service Information

The family of Wanda Jean "Bobbye" Williams created this Life Tributes page to make it easy to share your memories.

Thank You Aunt Bobbye For Loving Us
By Sherri Blevins