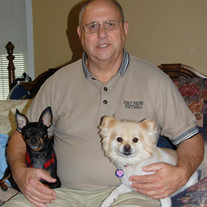 Wallace Edd Smith, 71, of Fort Payne, passed away Tuesday night, November 16 at DeKalb Regional Medical Center, Fort Payne. Viewing will be held Thursday night, Nov. 18, from 4-8 p.m. at Rainsville Funeral Home and will lie in state at Second Baptist Church Friday from 12-2 p.m. Funeral services will be held Friday, November 19, 2021 from the Second Baptist Church with Rev. Will Ramage, Rev. John Keefe, and Dr. John Screws officiating. Burial will follow at Glenwood Cemetery in Fort Payne with Rainsville Funeral Home directing. Mr. Smith was a member of Second Baptist Church where he had served as trustee, deacon, church treasurer and anywhere else he was needed. He enjoyed doing whatever he could for the Lord. He was a quiet man with a big heart and a friend to all. He was a devoted husband and loving father and grandfather. He loved the Fort Payne Improvement Authority and valued the time he spent serving on the Board of Directors. He was an avid Alabama Crimson Tide fan and enjoyed helping coach youth league sports teams that his children participated in. Drag racing was another pastime he enjoyed. He is survived by his wife of 42 years, Monia Keef Smith, Fort Payne; son, Wallace Andrew Smith and wife Krissy, Chelsea, AL; daughter, Melissa Gaines and husband Will, of Fort Payne; two grandchildren, Madalyn and Logan Smith, Chelsea; mother, Vernett Smith, Pine Ridge; brother Travis Smith and wife, Kim Smith, Fort Payne; Mr. Smith was preceded in death by his infant son, William Charles Smith and his father, Kermit J. Smith. He was a 1968 graduate of Plainview High School and was retired from DeKalb Wholesale Electrical and Plumbing. Pallbearers were Gilbert Santiago, Garry Simpson, Mike Key, Barry McClung, Danny Ashley, and Jose DeSoccaraz. Honorary pallbearers were deacons of Second Baptist, and employees and board members of the Fort Payne Improvement Authority.

The family of Wallace Edd Smith created this Life Tributes page to make it easy to share your memories.

Send flowers to the Smith family.