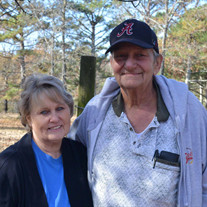 Mr. Steve Lybrand, age 66 of Dutton, passed away on Saturday, June 22, 2019 at his residence. Funeral service is Tuesday, June 25, 2019 at 11:00 am from Rainsville Funeral Home Chapel with Rev. Shannon Brewster officiating. Burial will follow in Pleasant Hill Cemetery. Family will receive friends Monday from 4:00 pm until 8:00 pm and Tuesday from 8:00 am until 11:00 am. He is survived by: Wife: Debbie Lybrand of Dutton; Son: Brian Lybrand and wife Denise of Pisgah; Daughter: Melinda Tuten and husband Robby of Dutton; Grandchildren: Marissa Felton, Sydney Lybrand, Claire Lybrand, Hudson Lybrand, Cooper Lybrand, Jacob Tuten, and Seth Tuten. He is preceded in death by: Grandchild: Emme Lybrand; Parents: A.L. and Lillie Lybrand; Brothers: Clifton Lybrand and Jerry Lybrand. Steve was a 1971 graduate of West End High School (Walnut Grove) and continued his education at Snead State College. In 1972, he married his high school sweetheart, Debbie Green (Altoona). In 1974, he was employed with the US Postal Service in Gadsden. In June 1979, at the age of 27, he was appointed postmaster at Dutton, making him the youngest postmaster in Alabama. He worked for the postal service for 34 years before retiring in 2008. After his retirement, he spent his time gardening, tending to his farm animals, and furthering his woodworking craft by fiddling at Harris Millworks. Most of all, his enjoyment was his children and grandchildren. Steve was blessed to be able to coach his son and daughter in baseball, softball, and basketball. He was very active in the Boy Scouts. He served several years on the Dutton City Council. He attended Dutton Baptist Church where he was a deacon. He will be missed greatly for his love and desire to help others. His family would like to extend special thanks to Dr. Gabe Belue and the staff of ABC Hospice.

The family of Steve Lybrand created this Life Tributes page to make it easy to share your memories.

Mr. Steve Lybrand, age 66 of Dutton, passed away on Saturday,...

Send flowers to the Lybrand family.