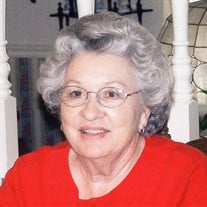 Mrs. Lucy Blevins Garrett, 85 of Fort Payne passed away peacefully on Thursday, January 3, 2019, at Summerford Nursing Home in Falkville, Alabama. Mrs. Garrett was born in DeKalb County, Alabama on August 2, 1933, a daughter of the late R.B. Blevins and Nela Clark Blevins. In addition to her parents, she was preceded in death by her husband of 38 years, James D. Garrett, four brothers, James Blevins, Clifford Blevins, J.B. Blevins and Robert Blevins, two sisters, Sarah Wright and Annie Ruth Hill. Mrs. Garrett is survived by three children; two sons and daughters-in-law, Ricky and Lynne Garrett of Summerville, Georgia and Randy and Troyce Garrett of Fort Payne, and one daughter and son-in-law, Ann and Darrell Ray Maddox of Cullman. She also leaves behind seven grandchildren and twelve great-grandchildren, Tracy and Jim Davis of Rome, Georgia, Adam and Heather Garrett of Sand Rock and their children, Chase and Caley, Jeremy and Belinda Garrett of Summerville and their children, Addie and Asher, Tiffany and Ryan Cummings of Auburn and their children Anderson and Bradley, Heath and Katie Garrett of Fort Payne and their children Brantley and Elijah, Jennifer and Steven Hasting of Vinemont and their children Hunter and Lily, and Jeffery and Jeni Wilhite of Cullman and their children, Dawson and Cheston, along with two brothers, Carl “Red” Blevins of Griffin, Georgia and Richard “Pete” Blevins of Eufala, and many nieces, nephews and cousins. She was a faithful servant of the Lord and was a member of Allen Memorial Baptist Church. She devoted her time to helping others and loved spending time with her family and friends. Visitation will be at Minvale Baptist Church, Fort Payne on Sunday, January 6th from 1-2:30 PM . A celebration of life service will follow at 2:30 PM in the sanctuary with Bro. John Keefe officiating and Rainsville Funeral Home directing. Pallbearers will be Adam Garrett, Jeremy Garrett, Heath Garrett, Jeffery Wilhite, Steven Hasting and Jim Davis. The family would like to extend a heartfelt thank you to the nurses and staff of Summerford Nursing Home in Falkville for their love and care. In lieu of flowers, please make donations in Mrs. Garrett's memory to St. Jude's Children's Research Hospital.

The family of Lucy Blevins Garrett created this Life Tributes page to make it easy to share your memories.