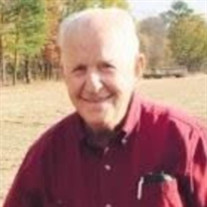 Kenneth Herman Rooks, was born in Albertville Alabama January 8, 1931 to his parents, Sidney Clay Rooks and Ella Webb Rooks, and was the youngest of eight children. As a young person, Kenneth learned to face adversity in the depression era through the loss of two of his older siblings Pearl and Harvell. Kenneth Graduated May 1950 from Pisgah Highschool, Pisgah Alabama, and played on the Varsity Basketball Team as a high school Junior and Senior. Kenneth began what would ultimately be a 30+ year career in Chattanooga Tennessee with E. I. Dupont after his high school graduation. Soon after his 20th birthday, Kenneth entered the U.S. Army in March 1951 destined for the Korean conflict. His combat duty was cut short by a severe automobile accident in May of that year. His recovery spanned several months in the Hospital. He was honorably discharged in March 1953. Kenneth married the love of his life, Hilda Jo (Mearse) Rooks August 1952. He and Jo moved to Chattanooga to be reemployed by Dupont. During the remainder of the 1950’s, 1960’s, and early 1970’s Kenneth’s Entrepreneurial spirit saw him become a home builder while holding a full-time job with Dupont. During that time he successfully built homes for his parents, his siblings, his own family, as well as friends and other acquaintances. These skills, along with his abilities to understand and repair almost anything mechanical, gained him the respect of his peers and admiration of his family. After a successful career with Dupont, Kenneth and Jo returned to the family farm in Henagar Alabama until recently when they moved to New Market Alabama to be nearer son Jack Rooks. Kenneth is survived by his beloved wife “Jo” of 69 years, sister Jane Rooks Cohn, of Monroe Louisiana, and son’s Larry Rooks (Mary Ann) & Jack Rooks (Lynne), Grandchildren, Holly Rooks Grenvicz (Joseph), Bradley Rooks (Jill), Lauren Rooks McGehee (Jacob), and Tyler Rooks, as well as Great Grandchildren: Lyla Grenvicz, Betsy Grenvicz, Clay Grenvicz, and, Hayden and Hope Rooks. Preceding Kenneth in death are his Parents, Sisters; Pearl Rooks, and Cordelle Rooks Harrison, Brothers; J.W. Rooks, Harvell Rooks, Fred Rooks, and Alvin Rooks. During their time in Chattanooga, Kenneth and Jo were long time members of the Memorial Baptist Church, followed by many years of membership in the Pisgah Baptist Church after their move back to the Henagar Alabama farm. Kenneth was a Patriot. His life was a testament to hard work, generosity, and service to his God, Family, and Country. His example lives on. Funeral service will be held Sunday, December 12, 2021 at 3:00PM with Pastor Craig White and Pastor Alan Crawford officiating. Burial will follow in Rainsville Memorial Park cemetery. Visitation will be held Sunday, December 12, 2021 from 1PM until 3PM.

Kenneth Herman Rooks, was born in Albertville Alabama January 8, 1931 to his parents, Sidney Clay Rooks and Ella Webb Rooks, and was the youngest of eight children. As a young person, Kenneth learned to face adversity in the depression era... View Obituary & Service Information

The family of Kenneth Herman Rooks created this Life Tributes page to make it easy to share your memories.

Send flowers to the Rooks family.