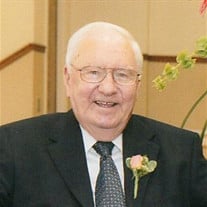 Mr. Hugh Don Williams age 86 of Rainsville, Alabama passed away on Tuesday, May 8, 2018 at his residence. He was the son of the late George Ruben & Bessie Lou Williams of Rainsville. He was a loving husband and father. He was married to Wanda Jean “Bobbye” Stout of Pine Ridge for 68 years, and they had two children, Rodney Williams and Kelly Williams Bryson. In early adulthood,Hugh Don worked with his brother, Dewey Williams, in a feed mill business as well as driving a peddling truck, or “rolling store” as it was nicknamed, throughout DeKalb County. He then joined the army and served in the Korean War. After the war, he worked for Davenport Gas. In the early 60s, Hugh Don again went to work with his brother Dewey, becoming a partner in the family ran grocery store. The two brothers were later joined by a third brother, G.R. Williams, in the family business. In the early 80s, Hugh Don became one of the first retail counselors for Mitchell Grocery Corporation where he worked until his retirement in 2007. Hugh Don was active in the Chavies community all his adult life and attended Pilgrims Rest Primitive Baptist Church in Rainsville, Alabama for many years. Hugh Don is survived by his wife ,Bobbye”, one son Rodney Hugh Williams and wife Jeanette of Rainsville, Al,one daughter, Kelly Bryson and husband Wally of Douglasville, GA, one sister, Virginia Latty and husband Ralph of Rainsville, AL, one adoptive brother, Robert Dick Anderson and wife Charlene of Centre, AL, and two grandsons, Will Bryson and wife Ashley of Charleston, South Carolina , and Tucker Bryson of Douglasville,GA. Other survivors include numerous nieces and nephews along with a multitude of friends. He was preceded in death by his parents George Ruben and Bessie Lou Williams, seven brothers, Dewey, Jack , Ray , Elton ,G.R., LLoyd , and Billy Williams, and one grandson,William Alexander Bryson. Funeral services will be held on Friday, May 11, 2018 at 1PM at the Rainsville Funeral Home Chapel with Elder Ricky Harcrow officiating. Burial will follow in Mountain View Memory Gardens with Rainsville Funeral Home, Inc. directing. The family would like to extend a special thank you to special friends Randy Smith, Kathy Townson, and Fran Shankles for all their help during their loved one’s illness.

Mr. Hugh Don Williams age 86 of Rainsville, Alabama passed away on Tuesday, May 8, 2018 at his residence. He was the son of the late George Ruben & Bessie Lou Williams of Rainsville. He was a loving husband and father. He was married to... View Obituary & Service Information

The family of Hugh Don Williams created this Life Tributes page to make it easy to share your memories.

Send flowers to the Williams family.