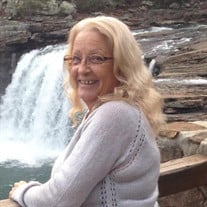 Gaynell Outlaw Morelock, 69, returned to her heavenly home on April 12, 2020. Her devotion to her family and her firm belief in God supported her during her illness and ultimately gave her peace. Gaynell was born to the late Rev. John Herald Outlaw and Ola Sargent Outlaw, a Baptist pastor/farmer and a homemaker respectively, in Dutton, Alabama on May 8, 1950. Her paternal grandparents were Joseph Outlaw and Callie Caskey Outlaw. Her maternal grandparents were Charlie Sargent and Lula Hicks Sargent. She was immersed in the Christian community that would be her lifelong support from an early age. She graduated from Section High School in 1968. During her time in school, she was involved in many activities. She was on the production staff for the yearbook and a student librarian. She was involved in the FHA and the student newspaper. She was also chosen her senior year for the Who's Who where she was named the "Biggest Flirt." Gaynell was an avid reader and her interest in reading material was eclectic. Her talents were many and among the ones she loved were flower arranging, gardening, and painting. She found peace and joy when she was doing her artwork. She was also an amazing canner. Her canned green beans were sought after by everyone. One talent that she truly enjoyed was decorating and she was requested to do so often. Gaynell married Rodney Morelock August 28, 1969, and moved to Dekalb County, Alabama where they lived and raised their daughter, Kelly. Gaynell was a member of the Pleasant Hill Baptist Church in Fort Payne, Alabama. She was involved as a member and taught Sunday School classes, Vacation Bible School, and arts and crafts. Gaynell had a way of letting people know they were important to her and she was always there to help family, friends, and neighbors. She will be dearly missed by her loved ones, who celebrate the fact that she is at peace with her creator. Gaynell is survived by her daughter Kelly Morelock and her grandson Cole Holland, her sisters Jimmie Faye Shrader, Janice Hendrix and brothers John Outlaw and Emory Outlaw, eight nieces and three nephews; sister-in-law Susan Ellison; special friend Craig Harper. She is preceded in death by her husband Rodney Wayne Morelock; sisters Lula Carter and Louise Townsen; Father-in-law Buren Morelock and mother-in-law Lee Dale Morelock; brothers-in-law Herman Carter, Billy Townson, Jesse Shrader, Stanley Morelock; nephew John Ellison Visitation will be on Friday April 17, 2020 and will be private but friends may message Kelly to arrange a time due to the quarantine. It will be at Rainsville Funeral Home and entombment in the mausoleum at Mountain View Memory Gardens. In lieu of flowers donations may be made to Shepherd's Cove Hospice in Albertville, Alabama.

Gaynell Outlaw Morelock, 69, returned to her heavenly home on April 12, 2020. Her devotion to her family and her firm belief in God supported her during her illness and ultimately gave her peace. Gaynell was born to the late Rev. John Herald... View Obituary & Service Information

The family of Gaynell Outlaw Morelock created this Life Tributes page to make it easy to share your memories.

Gaynell Outlaw Morelock, 69, returned to her heavenly home on...